Can You Climb Tower Bridge?

Photo by Guilherme Stecanella on Unsplash

Can you climb Tower Bridge? Yes you can!

Fortunately, you won't need ropes or grappling irons. You can take the stairs or the lift inside the two towers of the bridge.

When you get to the top, you'll find not only great views, but also a glass floor that lets you see the people and cars on the bridge. If you are lucky (or time it right), you see the bridge open and boats passing underneath, while the cars have to wait.

The Tower Bridge Glass Floor was opened in 2014 and offers amazing views over the River Thames and the Tower of London. You'll be able to see The Shard, St Paul's Cathedral, and even as far as Wembley Stadium on a clear day.

You'll be floating 42 metres above the river, with nothing beneath you but some very tough glass! So a good head for heights is advised as you traverse the 11 metre long walkway.

The good news is that the glass panels weigh quite a lot more than you, at 530kgs each, so you are going to be pretty safe.

To get up to the walkway, you can climb the stairs inside one of the towers.

The Glass Floor is part of the Tower Experience - see more details in the box.

What you need to know about the Tower Experience

What's included: You get access to the Glass Floor, and the Victorian Engine Rooms

Access: The walkway can be accessed by stairs (there are 206 of them) or there is a lift.

Getting there: There are a number of tube stations within easy reach - Monument, London Bridge and Tower Hill. If you want to drive, there are many public car parks in the area.

How long will it take?: The Walkway doesn't take too long to do, but there is a lot to see in the Engine Rooms. Allow 1-2 hours in total

When the Tower Bridge Glass cracked You might be alarmed to know what within a few days of opening, the glass walkway cracked!

A member of the catering staff was carrying a tray over the walkway, and a beer bottle fell directly onto the glass floor. The top layer of glass out of 5 layers shattered.

Fortunately, the glass could be replaced and the attraction opened again within a few days. No one got hurt as a result of the accident.

Even so, I wouldn't have wanted to be in that staff member's shoes when they had to explain to the boss that his £1m attraction had to be closed!

Things to do near Tower Bridge

The area around Tower Bridge is jam-packed with things to do. These include:

A Brief History of Tower Bridge 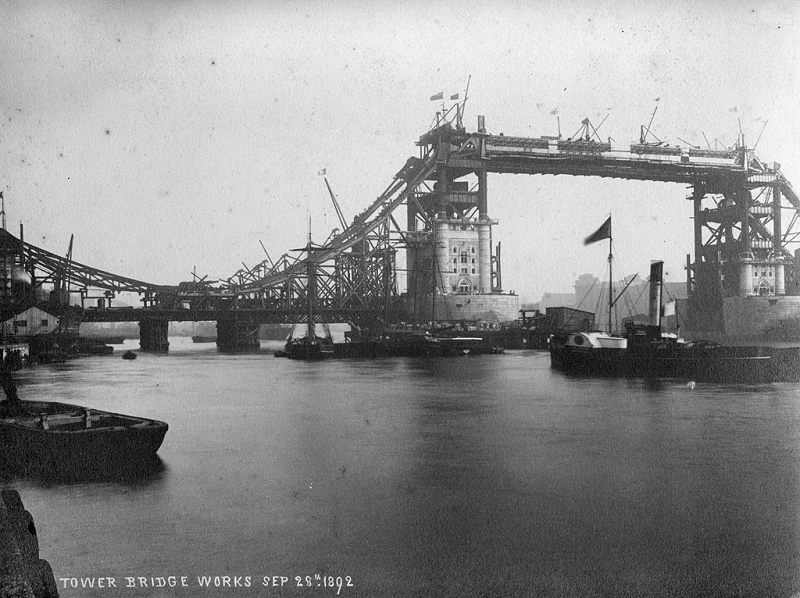 Tower Bridge under construction in 1892

In the late 1800's, there was increased demand to cross the river east of London Bridge. A bridge was the obvious solution. But there was a problem, the section of the Thames between London Bridge and the Tower of London was part of the Pool of London and ships needed access to the numerous wharves and warehouses in the area.

However, those ingenious Victorians were not thwarted: a committee was formed and more than 50 designs were considered. Eventually a bascule design was chosen, with two leaves (or bascules) forming the central span, which could be raised and lowered. The architect chosen was Sir Horace Jones, one of the judges on the committee. So we're sure that was a fair competition . . .

Construction took 8 years and the bridge was finally opened on 30th June 1894 and everyone was delighted. Well, not everyone. A few years earlier, the Tower Subway opened under the river. This was originally a railway but was converted to foot traffic and charged a toll of a ha'enny. The bridge was free, though, so the subway lost most of its business and eventually closed.

The high-level walkways (where the glass floor is now) were originally open to the public, so that foot traffic could continue when the bascules were raised. Unfortunately, they became known as a haunt for prostitutes and thieves! They were closed in 1910 and didn't reopen until 1982 as part of the Tower Bridge Exhibition.

The Great Fire of London - a Self Guided Walk