Photo by Tim Gouw on Unsplash

If you are thinking a taking a long trip somewhere, one of the first things on the list to consider is how safe your destination is likely to be. This is especially true if you are planning to travel alone as you will only have yourself to rely on.

As a traveller, a number of factors increase the risk of crime:

For all of these reasons, it makes sense to understand the risks of the country you are visiting.

If you are thinking of coming to Europe then good news - you are already coming to the safest continent on the planet, according to the Global Peace Index chart below! As long as you take sensible precautions, you are very unlikely to have any issues wherever you visit, and however long you stay for. 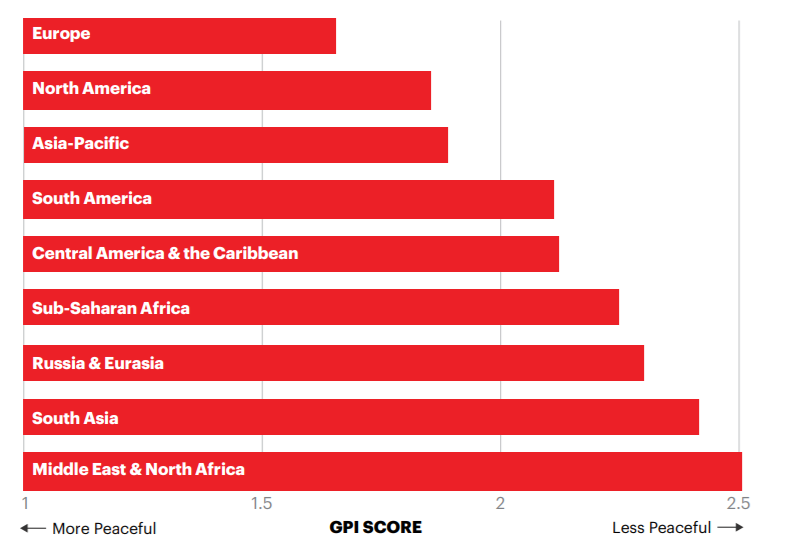 But Europe covers a whole range of different cultures, political stability, level of urbanisation and approaches to law enforcement, and these all mean that personal safety varies across the continent.

In this post we are going to focus on some hard data showing how these differences play out in terms of crime and personal safety. The whole point about travelling to another country is to expand your world view, but the other side of that is that the unfamiliar might feel threatening or dangerous even. But making decisions about actual danger is best done by looking at historical events rather than gut feeling.

Let's start with the worst: terrorism. Terrorism is very visible, very newsworthy. Because terrorism is so easy to bring to mind, the human brain tend to overestimate the probability of it happening (this is called the availability bias). In fact, terrorism is responsible for a tiny number of fatalities worldwide, compared to other causes of death.

If we focus on countries in Europe, the chart below shows the ratio of terrorism-related fatalities to deaths from road accidents in 2017. For most countries, there were no deaths from terrorism, hence the ratio is zero. Even for the United Kingdom, you would have been about 50 times as likely to die on the roads than at the hands of a terrorist. And 2017 was a particularly bad year for the terrorism in the UK.

Sources: European Transport Safety Council
National Consortium for the Study of Terrorism and Responses to Terrorism

Realistically, you would have to be astonishingly unlucky to come to Europe for a few weeks and to be injured or worse in a terrorist attack.

Moving on to another cheerful topic - murder! It is difficult to get meaningful statistical data on homicides involving tourist in a foreign country, because thankfully, it occurs so rarely. If you are travelling alone, then one obvious danger is removed, which is that most murder victims know their killer. 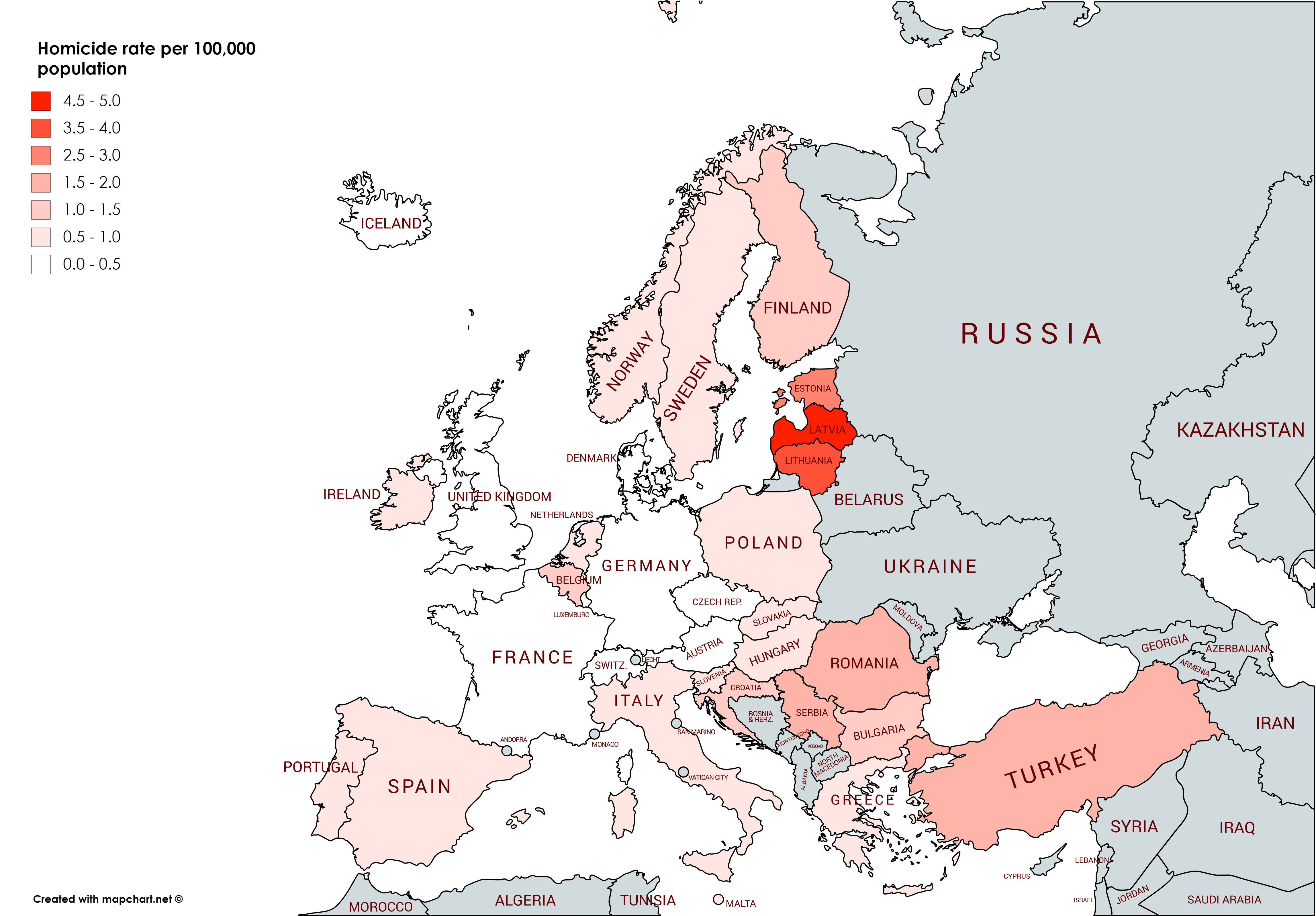 The Baltic states of Estonia, Latvia and Lithuania come off worst. The lowest murder rates are found in the UK and in the central European areas, France, Germany, Austria and Switzerland. The high rates in the Baltic states have been variously ascribed to organised crime, especially in the period post the breakup of the USSR, and drinking habits in these countries, for example: Homicide in Estonia

As a comparison, the USA had a murder rate in 2016 of 5.3 per 100,000 according to the FBI. This means that if you are visiting from the US, you are actually less likely to be murdered in any country in Europe than at home!

While loss of life through terrorism and assault are the crimes that people quite sensibly fear, they are thankfully, incredibly rare. You are much more likely to experience lower level crime like robbery, mugging and antisocial behaviour. The next chart shows the proportion of residents of a country who report that they have experienced crime and anti-social behaviour such as vandalism.

Experience of Crime, Violence and Vandalism in European Countries 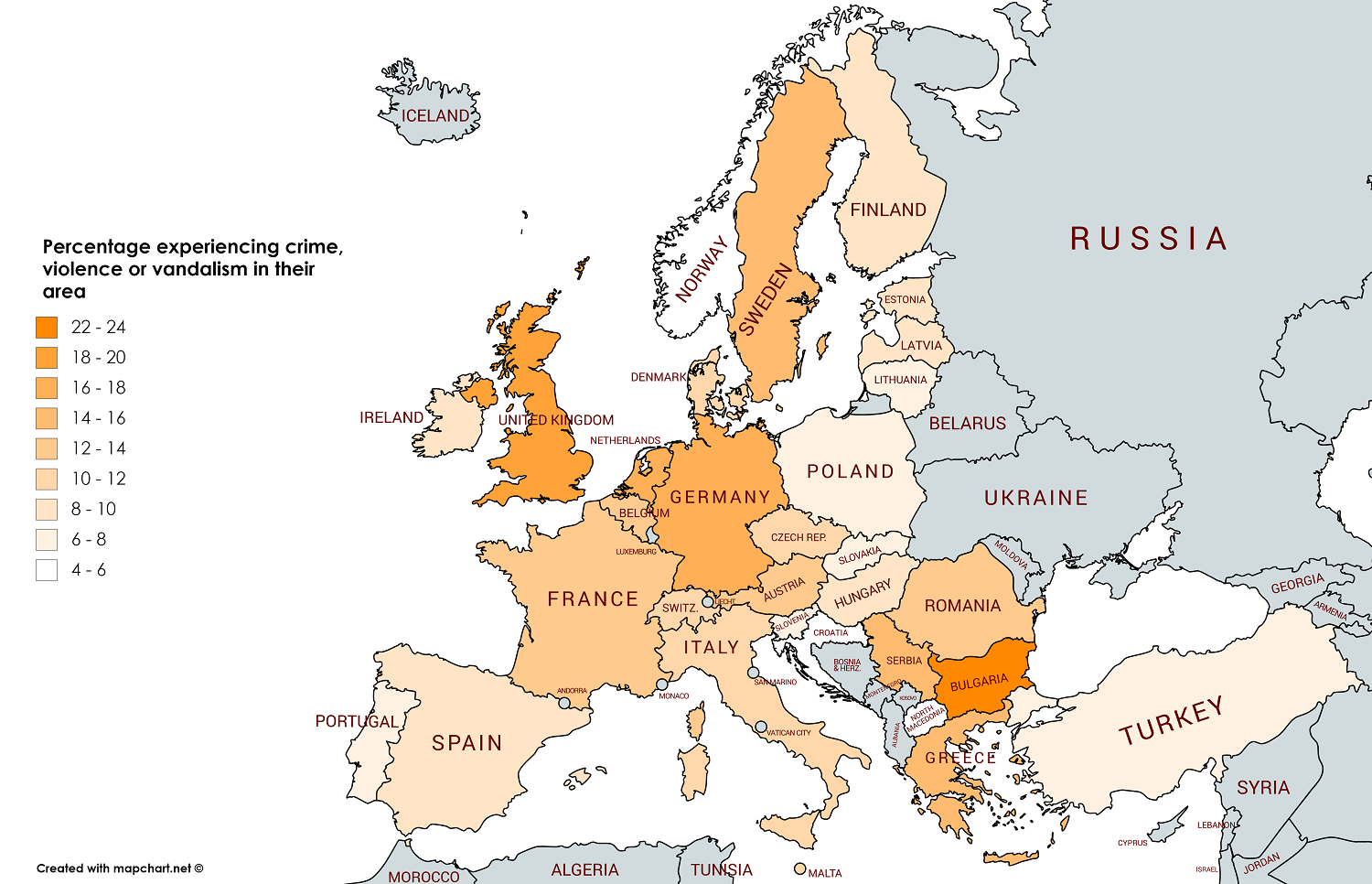 Solo women traveller face additional risks around harassment, violence and sexual assault. The chart below shows the results of a 2012 survey of violence against women, specifically physical and/or sexual violence by a non-partner in the 12 months prior to the interview.

As with other data provided in this post, the results are not directly related to the experience which may be faced by tourists, but in this case, the information probably indicates attitudes towards women and male entitlement.

The countries with the highest survey responses are perhaps surprising; France, Belgium, Denmark, Sweden and Finland all showed around 8% of women had experienced physical and/or sexual violence by a non-partner in the prior 12 months. At the bottom end of the scale with 2% were Portugal, Spain, Romania, and Latvia/Lithuania - remember that these last two were the worst offenders from a homicide point of view.

Europe is an extremely safe place to visit as a tourist in general. Having said that, across the scope of the continent, safety does vary. It doesn't mean that you should travel alone to a specific country, but that you should adjust how you travel, and the precautions you take, to suit the place you are visiting.

Be safe and have fun!

What's the Worst Age to Fly with Kids?